Back in the 1920s, Austria received a huge loan from the League of Nations because of its debt crisis. In turn, Austria de facto no longer had sovereignty over its budget, while the League of Nations sent a commissioner (Alfred Zimmermann from the Netherlands) to observe the implementation of the conditions for the loan; in particular, Austria had to undertakea considerable reduction of civil servants (about a third).

The initial Austrian reaction (by then-chancellor Ignaz Seipel) was as follows:

„We have been assured that the Powers which will participate by their guarantee in the work of the economic reconstruction of Austria and the representatives of international capital who will assist financially or with credits will continue to exercise a certain control over employment of the credits granted and over our general national economy. I will reply with all the frankness which our situation demands:

(1) We admit that such a control is inevitable and natural.

(2) It is understood that such a control will not affect the sovereignty of Austria ; for it would be harder and more humiliating for our people, whilst keeping a semblance of sovereignty, to lose their political liberty than once and for all to renounce their independence and become part of a great political entity, and so obtain a share of sovereignty in that of a great State.

(3) For this reason we earnestly desire that the control over the use of the credits should become effective without delay. There is no doubt that dependence, unless it really brings relief, is humiliating, but it would be unreasonable to refuse, simply for reasons of prestige, a remedy which would bring about a cure.

(4) We could not, of course, accept this control unless sufficient credits were granted at the same time. For nothing could justify the control of an independent State except the real help accorded to her.“ 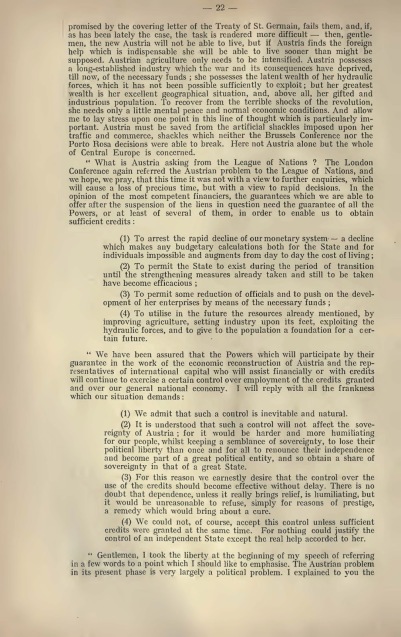 „I think every Austrian citizen may rest assured that, while undoubtedly there must be, under the guidance of the League and through the machinery which is going to be provided, a control exercised over the financial policy of Austria that can only end in benefit to his country, and that when at the end of two years Austria finds herself again a solvent nation, she will be so without having lost one shadow or tittle of any of that sovereignty or that supremacy over her own affairs which we all desire, and, indeed, are bound, as
Members of the League of Nations, to preserve. (Applause.)

The control, therefore, which will be exercised over Austrian policy is a control entirely for the benefit of Austria. Of course it is necessary, absolutely necessary, if you are to get money from the independent, individual investor.
At present, any prudent investor looking at the state of Austrian finances, seeing how far the expenditure exceeds the receipts, seeing that in every direction public money is being lavished and from how few sources adequate public money is coming in, will say at once :
“ You may talk to me of securities, but unless the State to which I lend manages its financial affairs better than the Austria of to-day, I should be a fool if I did lend.“ I believe that to be a system under which the control, working as it must work if it is to work successfully in daily harmony and co-operation with the Austrian administration, will be able to carry out the necessary reforms, not without difficulty, not, indeed, without suffering, not, perhaps, without for a brief period augmenting the distress which already prevails in Austria, but yet in no long time, after no unnecessary interval, bearing fruit of incomparable value in the direction of turning Austria again into a self-respecting, solvent, economically sound community, capable of holding up its head among all the nations of the world.
Therefore, ladies and gentlemen, control is necessary. How do we ensure control ? We ensure control, the kind of control and the only kind of control which is legitimate but the control which is necessary, by another protocol most carefully drawn up by which the Austrian Government and Parliament and people will pledge themselves to be partners with us in this great effort at national rehabilitation.“ 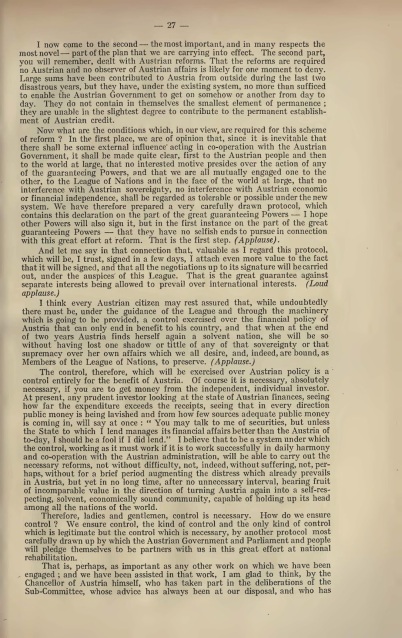