Tons of articles, comments, facebook-posts or tweets have been written on the „Islamic State“. What has received seemingly little attention are its own words: Hence a few quotes from its official magazine Dabiq including some comments of mine.

The latest issue of Dabiq includes an article titled „Why We Hate You & Why We Fight You“ – it is therefore addressed directly to a Western audience, not actual 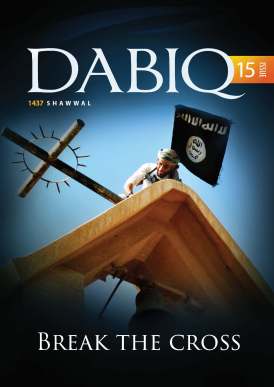 or future jihadists. It offers insight into the Islamic State’s mindset and tries to combat a view myths, most prominently that the West’s foreign policy is the primary reason for its anger.

1. We hate you, first and foremost, because you are disbelievers; you reject the oneness of Allah – whether you realize it or not – by making partners for Him in worship, you blaspheme against Him, claiming that He has a son, you fabricate lies against His prophets and messengers, and you indulge in all manner of devilish practices. It is for this reason that we were commanded to openly declare our hatred for you and our enmity towards you.

The Islamic State hates „us“ because of secularism, liberalism and all the associated grievances as well as the idea that man-made laws shall rule instead of god’s will. In this sense, its elaborations correspond to those of George Bush’s address to the Septemper 20, 2001 Joint Session of Congress („They hate what we see right here in this chamber — a democratically elected government. Their leaders are self-appointed. They hate our freedoms — our freedom of religion, our freedom of speech, our freedom to vote and assemble and disagree with each other.“)

2. We hate you because your secular, liberal societies permit the very things that Allah has prohibited while banning many of the things He has permitted, a matter that doesn’t concern you because you separate between religion and state, thereby granting supreme authority to your whims and desires via the legislators you vote into power. In doing so, you desire to rob Allah of His right to be obeyed and you wish to usurp that right for yourselves. “Legislation is not but for Allah” (Yusuf 40). Your secular liberalism has led you to tolerate and even support “gay rights,” to allow alcohol, drugs, fornication, gambling, and usury to become widespread, and to encourage the people to mock those who denounce these filthy sins and vices. As such, we wage war against you to stop you from spreading your disbelief and debauchery – your secularism and nationalism, your perverted liberal values, your Christianity and atheism – and all the depravity and corruption they entail. You’ve made it your mission to “liberate” Muslim societies; we’ve made it our mission to fight off your influence and protect mankind from your misguided concepts and your deviant way of life.

The crimes against Muslims and the war and the war against Islam are of obvious importance, but not the predominant reason for the Islamic State’s hate. In other words: It’s not the foreign policy, stupid:

although some might argue that your foreign policies are the extent of what drives our hatred, this particular reason for hating you is secondary, hence the reason we addressed it at the end of the above list. The fact is, even if you were to stop bombing us, imprisoning us, torturing us, vilifying us, and usurping our lands, we would continue to hate you because our primary reason for hating you will not cease to exist until you embrace Islam. Even if you were to pay jizyah and live under the authority of Islam in humiliation, we would continue to hate you. No doubt, we would stop fighting you then as we would stop fighting any disbelievers who enter into a covenant with us, but we would not stop hating you.

Lastly, it is important to note that the Islamic State is not a collection of simple madmen. That would certainly be misleading and overly simplifying (see, on this topic, Roy Baumeister’s „the myth of pure evil“-thesis). Its leaders have a vision (albeit an obviously wicked one from our point of view) and a strategy to implement it. This strategy has also been revealed in a recent New York Times article featuring an interview with a former Islamic State fighter: „Records from French, Austrian and Belgian intelligence agencies show that at least 28 operatives recruited by the Emni [a combination of an internal police force and an external operations branch, dedicated to exporting terror abroad] succeeded in deploying to countries outside of the Islamic State’s core territory, mounting both successful attacks and plots that were foiled. Officials say that dozens of other operatives have slipped through and formed sleeper cells.“

What is also interesting is that the Islamic State seems to hint at a truce in the last sentence of its article (a consequence of its military setbacks on the ground?):

As much as some liberal journalist would like you to believe that we do what we do because we’re simply monsters with no logic behind our course of action, the fact is that we continue to wage – and escalate – a calculated war that the West thought it had ended several years ago. We continue dragging you further and further into a swamp you thought you’d already escaped only to realize that you’re stuck even deeper within its murky waters… And we do so while offering you a way out on our terms. So you can continue to believe that those “despicable terrorists” hate you because of your lattes and your Timberlands, and continue spending ridiculous amounts of money to try to prevail in an unwinnable war, or you can accept reality and recognize that we will never stop hating you until you embrace Islam, and will never stop fighting you until you’re ready to leave the swamp of warfare and terrorism through the exits we provide, the very exits put forth by our Lord for the People of the Scripture: Islam, jizyah, or – as a last means of fleeting respite – a temporary truce.